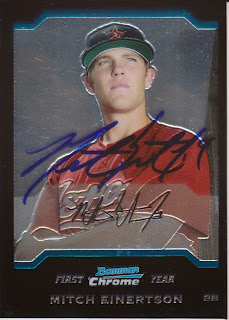 Here is a card that I got signed at a Wingnuts game in 2012. Mitch was playing for the Nuts at the time and he signed it for me prior to the start of an early season game. He seemed to get a kick out of seeing this card. Apparently, this photo was taken outside of a West Virginia motel at 8:30 in the morning. Mitch said that he was wearing an old school orange Astros hat that Topps airbrushed over. I had no idea that Topps took pictures for their cards outside of motels. I guess that can explain the lack of a backdrop.

Mitch was drafted in the fifth round by the Astros out of high school in 2004. He played in their system for six seasons, reaching as high as AA. Mitch hit .261 over two seasons at AA before getting released. After that, he landed in the independent leagues. He started out in the Golden League before hitting up the North American League. He then ended up in the American Association, where he spent parts of three seasons. In his span in the Am-Ass, he played with Wichita, El Paso, and Fargo-Moorehead. It appears that Mitch is now retired as he did not play professionally in 2014.

For some reason, Mitch is listed as a second baseman on this card. Mitch never played second base professionally. He was an outfielder, but did get into the infield twice in his career- once at first and once at short.
at 9:19 PM

That is a very cool back story on this card. Great post.