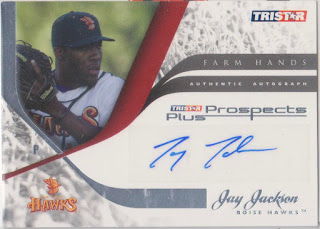 Here is a card that I pulled out of a pack in 2009. While I bought quite a few packs of 2008 Tristar Projections, I only bought one pack of Prospect Plus. That one pack yielded this autograph, so it worked out well.

Jay made his Major League debut with the Padres as a September call-up in 2015. He appeared in six games and posted a 6.23 ERA with 4 strikeouts in 4.1 innings of work. Jay got released after the season and he took his craft to Japan for the next three years. Playing for the Hiroshima Carp, Jay went 10-8 with 2 saves and a 2.10 ERA while striking out 192 batters in just 176 innings.

He came back to the States this season and was signed by the Brewers. It has worked out well for him as he has been on the big league roster since mid-July. This time around, he has so far pitched 24.1 innings and is 1-0 with a 4.81 ERA and 37 strikeouts.

With the big white border on this card, it looks like this card should have came out of the Projections set instead of this one.
at 9:49 AM