The Rest of 2008 Tristar Prospect Plus 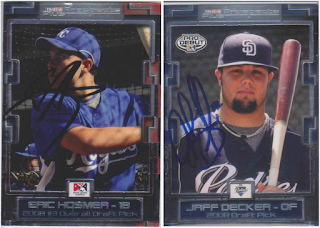 Eric Hosmer- I can't believe this is only the second card of Hos that I have posted on here. The guy was a mainstay on the Royals for seven seasons and I racked up a few autographs from him during his time in the Royals organization. Then, when I finally get around to posting some cards of him, he is with the Padres. But, that is how it goes. That is especially how it goes when I post cards on here from oldest to "newest".

I got this card signed by Eric in Burlington, Iowa in 2009 while he was playing for the Bees.

Jaff Decker- I have not posted a card of Jaff on here before. But, at some point, I will. So, he gets lumped into this "rest of" post just so I did not have to do a repeat Hosmer post. This card was given to me by Rod in 2011.

I am glad I never bought much of this product. In the limited cards that I have signed, they are horrible for autographs. There is a dark border, zoomed in shots, and dark pictures. This set is the complete opposite of that year's Tristar Projections set. I glad I bought a lot of Projections and passed on this one.

Watched Hosmer and Moustakas play a lot of games when they were assigned to Wilmington. Really kicking myself for not taking a few minutes to get their autographs...