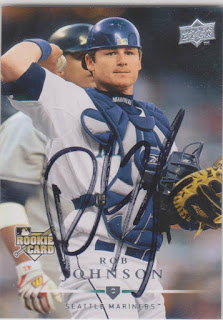 Here is what I miss about not having Upper Deck around anymore. Rob Johnson had three at-bats in six games in 2007. He did not make the '08 Topps base set, but he got some love from Upper Deck. Upper Deck had the tendency to include some fringe Major Leaguers in their main issue that Topps would always pass on. Rob would go on to play in 265 games and he would get just one Topps card. And, if it wasn't for Upper Deck, I would not have a Rob Johnson autograph. His Topps card came out in 2010 and I only interacted with him in 2008. The three cards after this one are all going to feature rookies that got no love from Topps, too.

Rob played in the Majors for parts of seven seasons with the Mariners, Padres, Mets, and Cardinals. Over that time, he was a .200 hitter with 8 home runs and 64 RBI. His best season was probably the 2009 season when he saw action in 80 games with the M's and hit .213 with 2 dingers and 27 RBI.

Rob had the privilege of making two pitching appearances at the end of his career. In those two games, he logged 1.1 perfect innings and recorded two strikeouts. The two unlucky individuals to strike out against the back-up catcher were Eric Thames and Paco Rodriguez.

Rob signed this card for me during batting practice at Kauffman Stadium.
at 9:43 AM