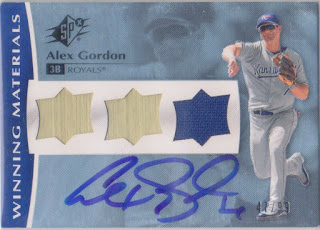 Since this is the fifth card of Alex Gordon that I have posted on here, I would normally add him in a set round-up post. But, this is the only card from this set that I have signed, so Alex gets another stand alone post.

I was pretty excited when I bought this card because it looked really cool online. I swore that it was a triple swatch with two bat pieces and one jersey piece. But, then it arrived and I was a little disappointed. There are no bat pieces on the card. It just has the one jersey swatch and room for two more relic pieces that are filled with some gold foil instead. That was kind of a bummer. But it was cheap and I got it signed, so it turned out well.

Alex had been playing some pretty bad baseball the last few years, but he has picked it up this season. Through 43 games this year, Alex is currently hitting .291 with 8 homers and 33 RBI. If he stays healthy and keeps driving in runs, he may get his first 100 RBI season of his career.

Speaking of his career, there was some talk of this season being his last. But, with him hitting the ball again, he has backed off the retirement talk a bit and is considering playing some more. If he keeps hitting, I am fine with that.
at 1:57 PM