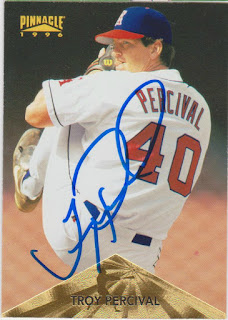 Here is a card of Troy Percival that I got signed at a Kansas State game last year. Troy is the head coach for his alma mater, UC Riverside, and they had the misfortune of playing baseball in Kansas in March.

I had planned on going to the game as soon as the schedule was released and I saw Troy was coaching. But, come game day, it was freezing out. I do not remember the exact temperature, but it had to have been between 30-35 degrees with a strong wind. I did not want to go to a game in those conditions and I certainly wasn't taking my one year-old out in that. So, I did the next best thing. We all drove to the park. The family stayed in the car and I went and bought one general admission ticket. I went in, got Troy's autograph, used the restroom, and then left. I was in and out in five minutes. We then left and enjoyed the day in lovely Manhattan, Kansas.

As for Troy, he was real easy to talk to as I asked him about coaching and the weather. He was clearly disappointed that they were not playing in California where it was 80 degrees at the time. I can't say that I blame him.

I got three cards signed by Troy, but this was the only Angel card. This card kind of reminds of some current Donruss cards, with the exception of some barely visible logos.

Troy is the Angels all-time save leader with 316 of them. He has 108 more saves than the second place closer and no current Angel is even in the top ten. I am sure his team record will be intact for some time.
at 9:22 AM

That's a GREAT story to go with that autograph!