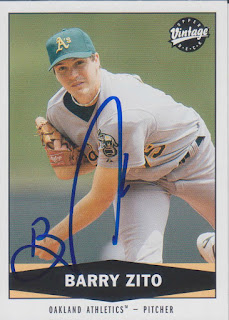 Here is the second card that Barry signed for me during his farewell campaign with the Nashville Sounds in 2015. I posted the first card three years ago and it can be seen here.

This card marks a bit of a milestone for this blog. This is the 100th Athletics card that I have posted on here. Only two other teams have hit the 100 card mark, the Royals and Padres. The Royals are up there because they are my local team. The Padres passed the mark because Rod, from Padrographs, loves to send me signed Padre cards. The A's reached that level because they used to play in Kansas City and I like getting KC A's cards signed. By my best count, I currently 26 signed KC A's cards with all but one of those already being posted on here. If it wasn't for my interest in that era of the team, there would have only been about 80 A's cards posted on here. In case you are wondering, the Angels are the team that is closest to reaching 100 card posts and they are currently sitting on 82.

Last I heard, Barry was trying to make it as a musician in Nashville. I have heard one of his songs and I actually like it. You can check it out on YouTube here.
at 10:32 AM

I was lucky enough to see Zito pitch on both sides of the bay. Good times. Nice autograph.

I'm jealous as I never saw him pitch. I did see Hudson on a couple of occasions, including a start with the Kansas Stars in 2016.