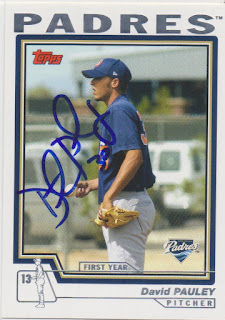 This is the second card of David Pauley that I have ever posted on here. I posted the first one eight years ago. When I posted that card, I was surprised to see that David had actually pitched in the Major Leagues because I had never heard of him. When I was getting ready to post this card, I again thought that I was going to post a card about a guy that had never pitched in the Majors. I guess my memory is not as good as it once was.

David pitched in 91 games over a five year span with the Padres, Red Sox, Mariners, Tigers, Angels, and Blue Jays. He started 20 of those games and was 9-19 for his career with a 4.68 ERA. His best season was with the Mariners in 2011. In 39 relief outings, David was 5-4 with a 2.15 ERA in 54.1 innings of work. He was then dealt to the Tigers at the deadline with Doug Fister and his numbers went up with Detroit. Even with his 5.95 ERA with the Tigers, he still managed a 3.16 ERA for the season. That was the only time he had an ERA under 4.00.

Despite pitching for six different clubs, David only has Padre and Red Sox cards made of him. All of those were made in 2006 or earlier.

This card, like the first one of Pauley, were given to me by Rod from Padrographs.
at 11:52 AM