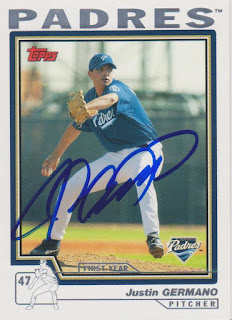 This card is almost a rarity for this blog. This is a signed Padre card that was not given to me by Rod, from Padrographs. I actually got this card signed myself.

Justin was on the Kansas Stars roster in 2016 and I was able to get him to come over and sign by the third base line before the game I attended. That was after I got the boot by the clubhouse where I was killing it. Once I joined the masses down the line, the going got rough and I was only able to snag Justin and Adam LaRoche. I am glad I was not in that spot the entire time.

Justin had a whirlwind career, appearing in Major League games in nine seasons with seven different teams- the Padres, Reds, Indians, Red Sox, Cubs, Blue Jays, and Rangers. Despite playing for all those teams, he only has Padre cards and a lone Phillies card. The Phillies card is from the 2006 Topps '52 rookie set. I am not sure how that card makes any sense since Justin made his Major League debut in 2004 with the Padres. Nonetheless, I kind of wish I would have picked that card up to get signed.
at 9:22 AM