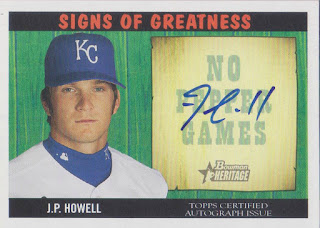 Here is a card that I picked up for cheap from COMC last year. This one set me back all of $1.50. I picked it up just because it showed JP as a Royal.

JP pitched more games for the Royals than I realized. He started fifteen games with them in 2005 and was 3-5 with a 6.19 ERA. He was then traded to the Devil Rays in 2006 for Joey Gathright. He started 18 games for the Rays in '06 and '07 before moving to the pen in '08 and establishing himself as a reliable reliever.

This is an odd card. I love Heritage cards and you cannot beat an on-card autograph. But, it just seems extremely odd that the players were told to sign the cards on the "No Pepper Games" sign.

I have no clue what is going on with JP's signature. Does he just sign Howell? Or is he trying to make his J and his P look like an H? Your guess is as good as mine.
at 11:28 PM