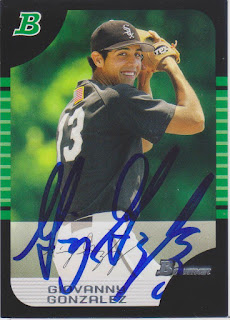 Every once in a while, I will get a random email from somebody that I do not know who wants to trade for a card they found on my blog. More often than not, it is somebody working on a set and they discovered that I posted a card that they needed. That is how I ended up with this card. Somebody noticed that I had some '05 Bowman Heritage cards that they needed and gave me some signed cards to pick from. This is the one that I chose. In order to land this card, I had to pony up two different Cesar Carrillo cards from that set. I think I did OK with that trade.

When I first saw this card, I was not expecting Gio to be pictured with the White Sox. I had no idea he was ever in their organization. Well, it turns out that he was also in the Phillies organization, too, before making his Major League debut with the A's in 2008.

Since making that debut, Gio has pitched eleven seasons and is currently 126-97 with about ten days left in this season. His best season was with the Nationals in 2012 when he was 21-8 with a 2.89 ERA and 207 strikeouts. He has never won more than 16 games any other season in his career, but he has run off a string of eight straight seasons with double digit wins and is one win away from his ninth straight.

Gio is currently hurling for the Brewers and is 2-0 in three September starts with a 1.65 ERA. With nine games left and a 3.5 game lead for the wildcard, Gio is trying to help his club reach the postseason for the fourth time in his career.
at 6:48 PM