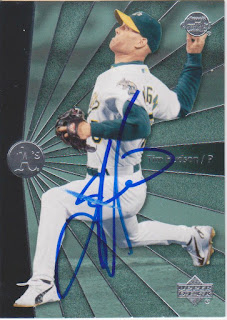 Here is the second card that I got signed by Tim Hudson at the NBC World Series in 2016. I posted the first one last month and it can be seen here.

At that game, I did 98% of my 'graphing by the clubhouse and batting cages in left field. The one problem with 'graphing there is that there is a nine foot tall chain link fence to keep you from going into the clubhouse. Since I use a book with photo corners to hold my cards in, the fence was a major obstacle for me. If I were getting balls signed, it would not be a big deal. But, I do not toss the book around like I would a baseball.

So, to circumvent the fence, I ended up finding a low spot on the ground and handing my book under the fence. While it wasn't ideal, it certainly got the job done and all the cards came out OK with the exception of this one. This one ended up scraping the bottom of the fence and it caused a streak right through the signature. But, considering that I got about forty cards signed at that spot and only one got messed up, I think I came out alright.

Tim pitched for Oakland for six seasons and had some of his best success with them. He went 92-39 with the A's. I know wins and losses do not tell much of a story of how good a pitcher is doing, but that .702 winning percentage is really impressive. Tim made two All Star teams with the A's and won 20 games for them in 2000 and had a single season high of 181 strikeouts in 2001.

I was a little worried about how well the signature was going to show up on this foil card. But, minus the streak, it came out looking good.
at 10:43 AM

I wonder if UD intentionally positioned Hudson in the photo to put that Sweet Spot logo in his hands. Anyways... as an A's fan... I love me some Huddy.