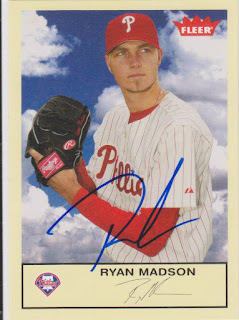 Here is the second of three cards that I got signed by Ryan Madson at a Royals game in 2015. I posted the first card two years ago and it can be seen here.

When I posted that last card, Ryan had just come off of a World Series victory with the Royals and signed himself a nice three-year deal with the A's. His tenure in Oakland lasted just a year and a half, though, as he was traded to the Nationals at the deadline last year. He pitched well for them down the stretch last season, but was a bit shaky this year, posting a 5.28 ERA in 44.1 innings of work. Nonetheless, the Nats were able to send him to the Dodgers at the end of August for a minor league player. Unfortunately, things haven't gotten any better in Los Angeles as he has racked up a 7.36 ERA in just 7.1 innings of work.

Being 38 years old and having an expiring contract, I would be surprised to see Ryan pitching next year. But, you never know. I didn't think he was going to make the Royals roster in 2015 after not pitching in four years and he still has a job in the Majors.
at 12:39 PM