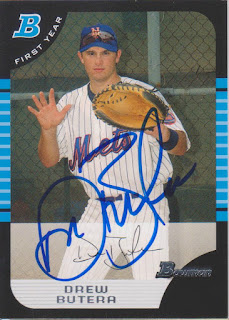 Drew Butera played for the Royals for parts of four seasons. Over that time, this is one of the two cards that I got him to sign for me. Granted, he does not have a lot of cards out there and I got him to sign a card for me once when he was a Dodger. But still, two cards in four years just goes to show how hard it has gotten to get Royals autographs in Kansas City.

I got this card signed by Drew at Royals Fanfest in 2016. The Royals were coming off their World Series championship and Fanfest was a madhouse. Because of the outrageous number of people attending the event, I did not bother standing in line for autographs. It just did not make sense to get in a line for an unknown signer that was going to show up in two hours. Luckily, I was able to snag some alumni autos at the alumni line whenever they showed up. Plus, I got a few alums by the wiffle ball field when they went over there to help the kids out. Right when we got in the doors, my kid got Mike Moustakas by the wiffle ball field, but he did not sign for me. But, I was able to get Drew over there later on that day and it was the only card I got signed at Fanfest by a current player. It was an odd Fanfest for me to say the least. But, that is what happens when your favorite team is a World Champ.

Despite being drafted by the Mets in the fifth round of the 2005 draft, Drew never played in the Majors with the club. He played in their system for two years before getting traded to the Twins for Luis Castillo.

This has got to be one of the worst poses for a catcher. Despite the lack of catcher equipment, it really does not look like Drew is playing catcher. What is that pose supposed to represent? Is it him catching a pitch out or a throw home from an infielder for a force out?
at 10:52 PM