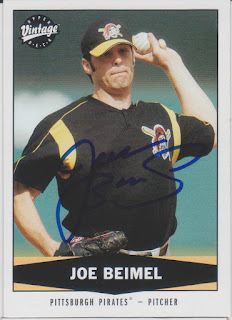 Here is a card that I got signed after the Kansas Stars game I attended last year. I didn't have any cards of Joe prior to him being put on the roster, so I had to buy a couple online. Anymore, I am pretty weary of buying cards just to hope that I can get them signed. But, on some lesser known players, especially relief pitchers, I will still do that now and then and it payed off with Joe. I couldn't get him before the game, but I got his attention afterwards and he came and signed the two cards I had of him.

In case you are wondering, Joe Beimel cards are hard to come by. Even though he pitched for thirteen seasons in the Majors, from 2001-2015, and logged almost 700 innings, there are hardly any cards of Joe. There is one Dodger card of him that Upper Deck made in 2007 and the rest of his cards are Pirate cards that came out between 2001 and 2004. This is just another example of the relief pitcher getting the shaft from card companies.

Joe pitched for the Pirates for four seasons. In 23 starts and 176 relief appearances, Joe was 11-20 with a 5.03 ERA. Those four seasons include the first three of his career and a fourth in 2011.

I once asked for Joe Beimel's autograph when he was playing for the Rockies. The only problem was that I did not have any cards of him and I gave him a card of Matt Belisle to sign.