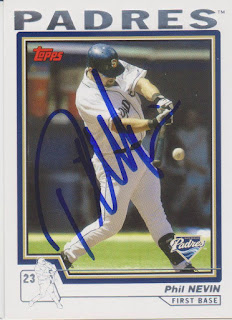 Here is the first of three straight Padre cards. This one is a Padrograph that was given to me by Rod in 2015.

This is now the sixth card of Phil Nevin that I have posted on here. I got three signed by him in Spring Training in 2014 and Rod has given me three cards on two separate occasions. I think I am good to go on cards signed by Phil. When I went and saw the Yankees play earlier this year, I didn't even bother looking for any cards of him.

Phil played for a handful of clubs during his career, but San Diego is where he spent the majority of his time. He spent nearly seven seasons with the Friars and racked up a .288 batting average with 156 home runs and 573 RBI. He ranks in the franchise's top ten in average, slugging, OPS, runs, hits, singles, doubles, home runs, total bases, and RBI. He made his lone All Star team as a Padre in 2001.

If I do ever get a chance to get Phil's signature again, I might try to find a card or two of him. But, with five signed Padre cards already, I will probably stay away from those cards. Instead, I will look for him playing with the Astros, Angels, Cubs, Rangers, or Twins. I already have a Tiger card signed by him.
at 8:26 AM