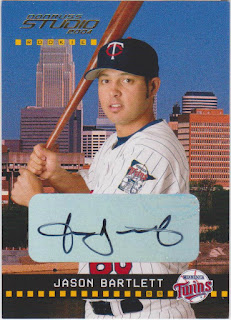 Every once in a while, my dad will buy me some baseball cards. He's been doing it since the mid-80s and I do not see him stopping anytime soon. Even when I was in college and could care less about baseball cards, my dad would still buy me a pack or two every now and then. I think he is just curious of what they are looking like from year to year.

Anyways, a couple of years ago, my dad called me to tell me that he pulled an autograph out of a pack. I was expecting something cool out of a current pack of Allen & Ginter or even Topps Archives. Nope, this was the card he pulled. It turns out that he got bored by the card selection at Target, so he picked up a repack box with a few packs and a 100 loose cards. This was one of the loose cards.

Now, I don't mean to sound like I am ungrateful that my dad pulled this card. That is not the case as I love any and all autographs, especially guys that I never got in-person that had respectable careers, like Jason. I just wasn't expecting him to pull an auto that was a dozen years old.