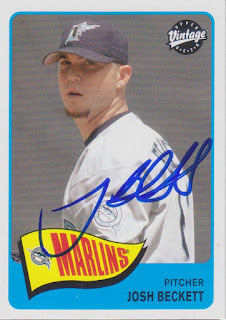 Here is another card that I got signed at the Kansas Stars game in 2016. When I went to that game, I had made my way around to the outfield to be by the clubhouse in left. I was doing really well there at first, as there was hardly anybody there 'graphing. Eventually, people caught on and there was a decent-sized crowd back there trying to get autographs from the players. Josh was the last that I got in that area before the no-fun police came out and erected a PVC pipe fence to keep people back from the chain link fence. It was the dumbest thing I had ever saw and it really put a damper on my evening.

Nevertheless, I was pretty excited to get Josh Beckett's autograph. I had three cards for him to sign, one for each team he played with, but he just signed this one. My dad got him on one, too, and it just so happened to be on his 2014 Topps Heritage card, the 1965 design that this card is based on.

For me, Josh became a big-name player during the Marlins improbable World Series run in 2003. He had a 9-8 record during the regular season, but he stepped it up in October. He took the loss in his one start in the Division Series against the Giants while tossing seven innings of one run ball. Then, in the NLCS, he started two games, and relieved in one, and he nabbed one win while posting a 3.36 ERA for the Series. His one win was a game five complete game shutout to stave off elimination. Then, in the World Series against the Yankees, he lost game three before coming back in game six and tossing a shutout in Yankee Stadium for the championship.

Josh would go on to win another World Series with the Red Sox in 2007, but him raising his arms after getting Jorge Posada to ground back to him is how I remember Josh.
at 3:14 PM