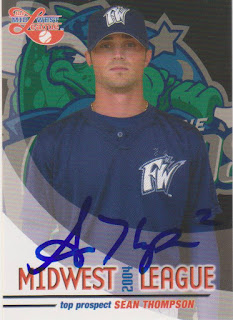 Here is a Padrograph that was given to me in 2015 when I met up with Rod in Hillsboro, Oregon. This one features Padre farmhand, Sean Thompson.

While Mike actually pitched in a handful of games at the Major League level, the same cannot be said of Sean. The highest Sean reached was the three games he pitched in AAA in 2007. Aside from the scoreless inning he accumulated at that level, he spent parts of three seasons in AA and was 19-23 with a 4.05 ERA.

Fort Wayne joined the Midwest League in 1993 and kept the Wizards moniker until changing the name to the Tin Caps in 2009.
at 8:34 AM