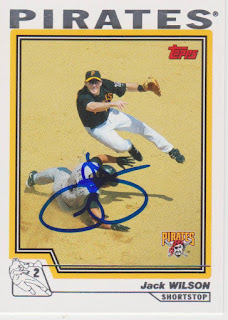 Here is the second card of Jack Wilson that I have posted on here. Jack signed six cards for my dad and I last summer after a Kansas Stars game at the NBC World Series. I posted the first card just last week and it can be seen here.

For me, Jack was a household name during his years with the Pirates. The Pirates were a little lean while he played and that might have helped him stand out more. But, for whatever reason, I would have thought that he would have been on more All Star teams than the shortstop I posted two days ago, Jason Bartlett. But, that is not the case. Both guys made one All Star team.