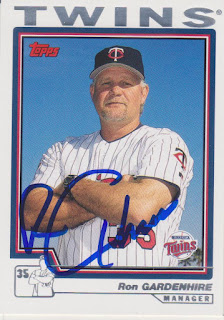 Here is a card of Ron Gardenhire that I got signed at a Royals game last year. Ron was the bench coach for the Diamondbacks at the time and he seemed a little shocked that I asked for his autograph. He asked me why I wanted his autograph and assumed it was because I couldn't get Paul Goldschmidt to come over. I told him it was because I don't get to see him anymore since he doesn't lead the Twins to town a dozen times a year to whoop up on the Royals. He just chuckled and signed the three cards I had of him.

After the season, he got the Tigers managerial job and gets to come back to Kansas City a dozen times a year. Luckily, though, his new team currently lacks the talent that he had in Minnestoa a decade ago.

Ron managed the Twins for thirteen seasons and was 1068-1039. During that time, he lead the Twins to a AL Central crown six times. Unfortunately, they never fared well in the postseason, going 6-21 while winning just one series. That series was Gardenhire's first trip to the postseason in his first year of managing, 2002, when his team beat the A's in five games.