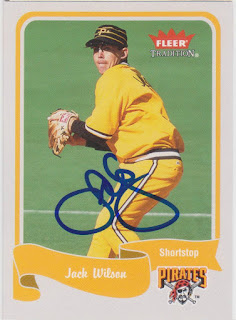 Here is the first of six cards that Jack Wilson signed for my dad and I after the Kansas Stars game last year. Unlike the previous year, we actually stuck around for the whole game since there were fewer people and I thought that I could get a few cards signed. I am glad I did as I was able to add Jack to the collection. Even though there was a paid autograph session after the game, Jack still made his way down the line, hurrying as many free signatures as he could. Being in such a rush, I really did not expect him to sign three for each of us.

The signature is really hard to make out, but he signed the cards in record time. I tried to find a newer, authentic auto from Topps to compare these to, but it appears Jack hand't had an autograph insert since 2005. The ones from '05 are definitely easier to read, though. I am just curious if all of his signatures look similar to this now or if this is just a super-rushed version.

You have got to love the retro uniform on this card. It would be much better, though, if it wasn't so baggy. It looks like this photo is from a contest against the Phillies at old Veterans Stadium.

I actually love the uniform on this card. The signature is even cooler. I'm glad it's in blue; I don't know how black would have looked.