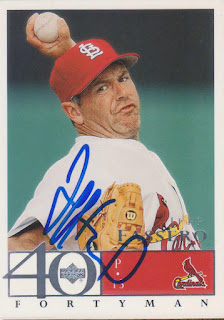 Here is the third and final card of Jeff Fassero that I got signed at a Reds Spring Training game last year. Jeff is the pitching coach for the Reds AAA affiliate in Louisville and he was nice enough to stop and sign on his way to the dugout. I posted the first card of Jeff, a nice-looking Expos card, earlier this year and it can be seen here. The second card I posted can be seen here.

Jeff arrived in St. Louis just before the 2002 trade deadline after being sent over by the Cubs for a pair of players to be named later. He made 16 relief appearances with the Cards and was 3-0 with a 3.00 ERA in 18 innings. He helped the Cardinals make the postseason and pitched well in relief there, as well. In the Division Series against the D-Backs, Jeff picked up two of the three victories for the team, tossing 2.2 innings of shutout ball in the three game sweep. He only pitched in one game of the NLCS against the Giants, facing two batters and getting them both out. That was the closest that Jeff had ever come to playing in the World Series.

He spent all of 2003 with the Cardinals and did a bit of everything. He appeared in 62 games, which included 6 spot starts, and racked up a 1-7 record with 3 saves and a 5.68 ERA. Despite the lofty ERA and being 40 years old, he still had something left in the tank and pitched for three more seasons with the Rockies, Diamondbacks, and Giants.

This has got to be one of the best looking Jeff Fassero cards out there. I am glad that I had it in my collection and was able to get it signed.
at 10:13 AM