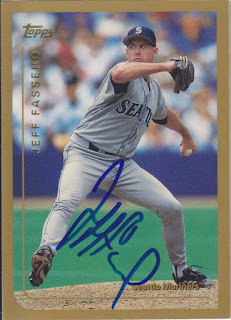 Here is the second of three cards that Jeff Fassero signed for me at a Reds Spring Training game last year. Jeff is the pitching coach for the Reds AAA affiliate in Louisville and he was nice enough to stop and sign three cards for me before a game at Goodyear Ballpark. I posted the first card earlier this year and it can be seen here.

After having a career-year with the Expos in 1996, Montreal shipped Jeff to Seattle shortly after the season for almost nothing in return. Jeff had two solid seasons in his first two years in Seattle, hitting double-digit wins each year and helping the club to a playoff birth in 1997. He made one start in the Division Series that season and pitched eight inning of one run ball for the win.

Then, in 1999, his third season with the Mariners, Jeff's numbers took a gigantic plunge. Over a 139 innings, Jeff was 4-14 while posting a 7.38 ERA. He ended up back in the bullpen for the first time since his second year in the Majors. The M's ended up trading him to the Rangers for a player to be named later and that later named player never played an inning in the Major Leagues.

I was happy to get Fassero TTM last year as well. Seems like a stand-up guy!