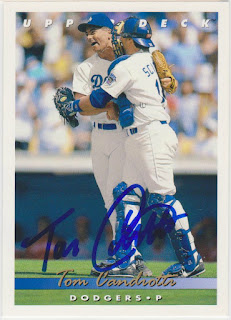 Here is the second card that Tom Candiotti signed for me in Kansas City this past season. Tom is a broadcaster for Diamondback games on the radio and he stopped to sign for me after hopping off the team bus. I posted the first card last month and it can be seen here. I have one more card of Tom to post, but, since it is an older card, it will be years before it makes its way on here.

Tom pitched for the Dodgers for six seasons. Over that time, he racked up a 52-64 record with a 3.57 ERA and 718 strikeouts. He pitched in one postseason game for them, a 1996 divisional series match-up. He came into game three against the Braves, trailing 5-0. He pitched two perfect frames before being lifted for a pinch hitter. The Dodgers lost the game as the Braves completed the sweep.

If I had to guess, I might bet that this photo was taken July 7th, 1992. On that day, Tom pitched a complete game shutout against the Reds as the Dodgers won the game 1-0. He allowed just three hits and struck out five.
at 9:02 AM