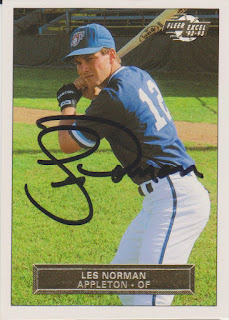 Here is a card that my dad got signed for me at Royals Fanfest in 2016. That was the worst Fanfest that I ever went to thanks to the team winning the World Series a few months beforehand. Because of that, fans came out in droves to see the team. I even saw Marlins Man at the event.

I took my dad, my oldest boy, and one of his friends with me. When we got in, all the autograph lines were full and people were lining up for the signings that started ninety minutes later. Normally, I would have got in that line. But, since I had the kids with me, I said screw it and stayed out of the autograph lines that day. I still managed a handful of signatures from an alumni signing spot and from guys giving instruction at the wiffleball field.

That was where my dad got this card signed. I was in the long line with the boys to get their picture with the World Series trophy. Next thing I know, my dad came up to me and told me to give him a card of Norman and Jerry Terrell and he would get them signed for me. How cool is that? My dad sure has come a long way from when I first started doing this over ten years ago. I used to have to nearly push him to venture over to get me an autograph and now he takes it upon himself. I really never would have thought he would have transitioned the way he did.

As for Les, he was recently on "The Wheel of Fortune". I guess the show came through Kansas City and he somehow got picked to participate. I never saw the airing, but he apparently won $17,650.
at 9:30 PM