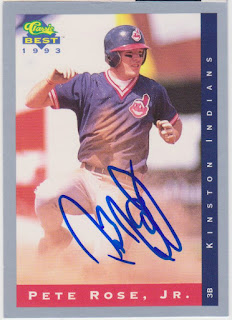 Here is the second card of Pete Rose, Jr. that I have posted on here. I posted the first one back in November and that one can be seen here.

Pete was the manager for the Wichita Wingnuts the last two seasons and I got this card signed at a game in 2016. Pete's contract with the Wingnuts did not get renewed, so he is moving on this year.

I mentioned in the last post of Pete that I was excited to see who the new Wingnut manager was going to be. I was hoping that it was a former player that had Major League experience and I got what I had hoped for. The only problem is that the new manager played for the Winguts for three or four seasons and I have four cards signed by him already. So, that did not got the way I had wanted.

I absolutely love the photo on this card. With the dust yet to settle, it just screams Pete Rose.
at 9:26 AM

You got half your wish. I don't know how many guys with major league experience wind up managing at that level in the minors. I do the Atlantic League and they have only a few guys that are new and are major league vets coming in each year.

There really aren't a lot. With the exceptions of Pete Incaviglia, Butch Hobson (who is debuting in the league this year), Tim Johnson, and Jeff Russell (a pitching coach), most of the coaches/managers that have had Major League experience have had very minimal experience.