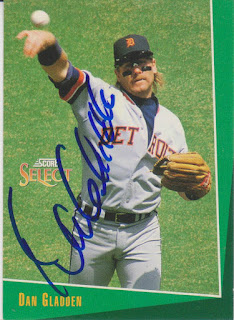 Here is a card of Dan Gladden that I got signed at a Royals game last season. The Twins were in town and Dan is a broadcaster for the team. I noticed him on the field during batting practice and I got him to come over and sign for me right before he left the field.

That was the second time that I got Dan to sign for me. I got him at The Ballpark in Arlington (or whatever it was called at the time) in 2009 and that card can be seen here. When I got that card signed, I gave Dan my book with three cards of him and he just signed the one. This time, eight years later, I gave him my book with two cards to sign. Those two cards were the same two cards that he didn't sign in Texas. The next time I see Dan, I am sure I will just have his '86 Topps card to sign, the one he didn't sign the other two times.

Dan spent his last two seasons with Detroit. In 1993, his final season in the Majors, he had a good year. Though he played in just 91 games, he still hit .267 and had a single season best of 13 home runs. His 56 RBI were the second most that he ever had in a season.

Dan would play the 1994 season in Japan before calling it a career.