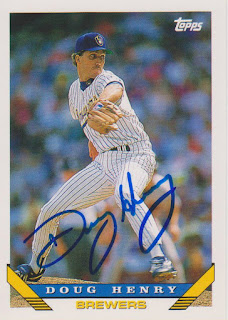 To my amazement, this is only the fourth card of Doug Henry that I have posted on here. Doug has been the bullpen coach for the Royals the last five seasons and he was always my go-to on a bad 'graphing day. Any time I struck out getting autographs from players, I always knew that I could venture down to the Royals bullpen and grab one from Doug. That was how I got this one signed at a game in 2014.

Unfortunately, the Royals did some shaking up with their coaching staffs and Doug has been demoted. Despite being with the big league club for five seasons and being the AAA pitching coach before that, Doug has dropped down to the pitching coach for the high-A Wilmington Blue Rocks. Taking Doug's spot in Kansas City is Vance Wilson.

I have no idea if Vance will be as accommodating as Doug was at the ballpark. But, if he is, I need to find some cards of him. I have one card of him and I got it signed at Spring Training in 2013 when he was the manager for the Royals AA team.

If anybody has any extra cards of Vance that they would like to trade, hit me up. He seems to have a decent amount of Mets cards from 2002-2004 and they must be a hot commodity right now. For whatever reason, COMC has one card of Vance for under a buck while all the rest are in the two to three dollar range. Or, you can even buy his base 2003 Topps card for $20.25. What is up with that?
at 9:26 AM