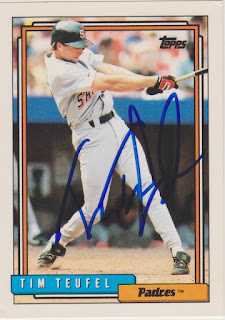 Here is a Padrograph of Tim Teufel that was given to me by Rod in 2015 when we met up at a Hillsboro Hops game. While I always get a mixed bag of stuff from Rod, this one was pretty cool because it is a known name of someone that I do not associate with the Padres. Even though Tim spent the bulk of his career with the Mets, I always picture him as a Twin.

Tim spent eleven seasons in the Majors, mostly manning second base. Over that time, he hit .254 with 86 dingers and 379 RBI. He was a regular his first couple of seasons in the league before moving to a back-up role. His best season was with the Mets in 1987. Though he only got 299 at-bats, he had a career best average of .308 while matching his best in home runs (14) and RBI (61). He originally hit the 14 and 61 mark with the Twins in 1984. The one difference was that it took him 568 at-bats to reach those numbers.