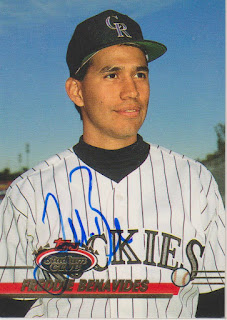 Here is a card that I got signed at Spring Training last season at the Reds game I attended. Freddie is the first base coach for the Reds and he signed for me by the Reds dugout. This was the only card that he signed.

Freddie spent parts of four seasons in the Majors with the Reds, Rockies, and Expos. Over that time, he was a .253 hitter with 4 home runs and 52 RBI while playing all four infield positions.

Freddie had his best season playing for the expansion Rockies in 1993. He played in 74 games that year and had career highs in average (.276), home runs (3), and RBI (26). He took the field as the starting shortstop in the Rockies first game and, like most of his teammates that day against Doc Gooden, went hitless in three at-bats.