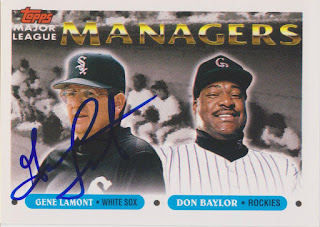 Here is the second card that Gene Lamont signed for me at a Royals game in 2016. Gene was a coach for the Tigers at the time and he stopped for me outside of the ballpark to sign my two cards. I posted the first card back in November and that one can be seen here.

Gene managed in the Majors for parts of eight seasons with the White Sox and Pirates. Over that time, his clubs went 553-562. That record is better than I thought it would be considering that he managed in Pittsburgh in the late '90s.

Gene's 1993 White Sox team won the AL West with a 92-70 record before losing the ALCS to the Blue Jays in six games. The Sox had a good team the following year, too. But the strike ruined any hope of a chance at a championship. The team then came out flat in the 1995 season and Gene was replaced after an 11-20 start. Gene finished his tenure in Chicago with a 258-210 record.

Gene is no longer with the Tigers organization. He was a holdover from the Jim Leyland days. But, he was ousted with Brad Ausmus after this last season. He is now working with the Royals as a Senior Adviser to the GM.

Sadly, Don Baylor passed away before I got around a finishing this card off.
at 11:17 AM