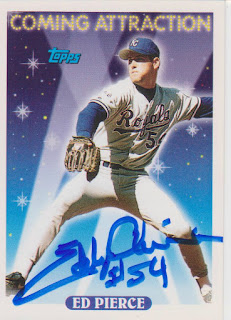 Since the conclusion of the 2017 regular season, I have really hit up the TTM autograph scene. I just counted how many cards I have got back since then and was a little amazed- 82 signed cards in about five months. There have been three main focuses for me when sending out cards. I have been adding signed '81 Donruss, former Royals, and Senior League cards to the collection, as well as some occasional vintage. This is one of those returns and it obviously falls into the former Royal category.

Ed made just two Major League appearances in his career and he did good enough to earn this "Coming Attraction" card from Topps. He made one start and had one relief appearance during his 1992 September call up with the Royals. In his start, he pitched four innings and gave up two run on eight hits with three strikeouts. He then pitched an inning and a third six days later and allowed no runs on one hit. And that was that for Ed. His career numbers are 5.1 innings with no record and a 3.38 ERA. He went on to pitch three more seasons in the minors before calling it a career.

I sent this card to Ed in early December and I had it back eleven days later.

If you want to see some of the recent TTM successes that I have got back, check me out on Twitter- @zmills40