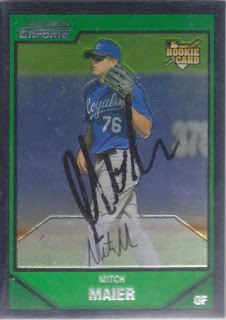 This is the second card of Mitch Maier that I have posted on here. The first one was posted way back in 2010 after I got back from my farewell tour of the Metrodome. That card can be seen here.

I bought this card in 2008 for my trip to Albuquerque, where I was going to see the Omaha Royals play. I missed out on Mitch that day, but I got him later on that summer by the Royals parking lot at Kauffman Stadium. 2008 was my first year back into autograph collecting after many years away from the hobby. At that point, I had not learned about prepping glossy cards, so this one is unprepped. It came out looking surprisingly okay despite the lack of a baby powder rub down.

I went to a Wichita Wingnuts game last night because Pete Rose was at the park. I was hoping to snag a couple of autographs from him, but I was unwilling to pony up the $30 to do so. It was still cool to see the Hit King in-person, despite the appearance being all about the money. Luckily, I got a couple of freebies from him through the mail in 2009. I just wish I had sent him more than just the one '81 Donruss card from the set. I'm pretty sure Pete is on three cards from that set.

Here is a picture of Pete coaching first base for the Wingnuts last night. I'm sorry it did not turn out better. 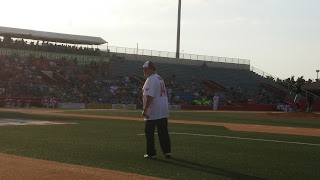