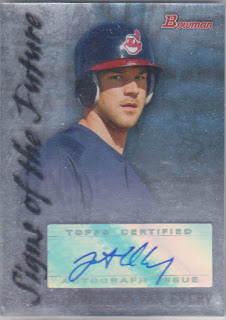 It has been a while since I posted last. Since then, I made a trip out west and saw games in Seattle, Hillsboro, OR, Sacremento, and San Francisco. Then, after I made it back home, I went to the AAA All Star Game in Omaha. I did not do quite as well as I had hoped on the autograph front out west, but I still got a little over thirty cards signed. Rod, from Padrographs, helped make up for that by meeting me at the game in Hillsboro and handing over a nice lot of Padrographs. That was very cool of him. Then, in Omaha, I did pretty well as I got twenty-seven cards signed there. So, overall, it was great little vacation and a much needed break from work.

Here is a card of Jonathan Van Every that I pulled out of a pack in 2008.

Jonathan played for parts of three seasons with the Red Sox. He was a .255 career hitter with 2 home runs and 9 RBI over 47 at-bats. He had the privilege of pitching in two games for the Sox, as well. He pitched a scoreless 2/3 of an inning in 2009. Then, in 2010, he pitched an inning against the Yankees and gave up a two run home run to Mark Teixeira, which happened to be Mark's third home run of the day. But, he did get Brett Gardner looking for his only strikeout. So, in 1.2 innings pitched, Jonathan had a 10.84 ERA.

Jonathan retired from baseball after the 2011 season.
at 4:26 PM