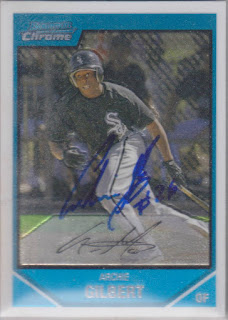 Here is a card that I got signed at a Tulsa Drillers game in 2010. Archie was playing for the visiting Midland Rockhounds at the time and I was able to get this card signed by the 'Hounds dugout prior to the game.

Archie was a non-drafted free agent that signed with the Red Sox in 2005. His tenure in the Boston organization lasted 24 Gulf Coast League games before they released him. The White Sox picked him up and he hit .332 in 2006 for their Rookie ball team in the Pioneer League. They bumped him up to A ball in 2007 and he hit .289 in the South Atlantic League.

Archie ended up in the A's organization for the 2008 season and played there for three years. He got his first taste of AA in 2009 and repeated the level in 2010. He then joined the Nationals for one season and hit .313 for their AA team. It was then on to the D-Backs for one last season, which was split between AA and high-A. The D-Backs released him mid-season and he went to Mexico for 22 games to finish off his career.

Archie played in the minors for eight seasons and was a .276 hitter. In AA, he hit .275 with 26 home runs over 363 games. But, unlike the last five guys I posted on here, Archie never played independent ball.
at 10:39 PM