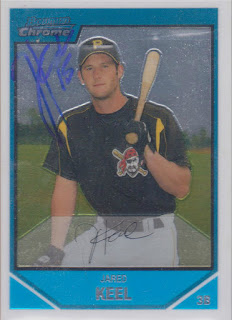 Here is another guy that spent some time in the American Association. However, I got this card signed when Jared was still in affiliated ball. Actually, a friend of mine got this one signed for me.

In 2009, I flew out to Maryland to visit an Army buddy. It was in September and the Carolina League playoffs were under way. Wilmington, Delaware, was a mere ninety minutes from where my friend lived, so I made him take me to a first round game. It was pretty nasty weather that night with on and off rain all night long. I decided I would 'graph the home team, a Royals farm team, and I would try to get my friend to get the visitors, the Lynchburg Hillcats. I gave my friend the instructions that if it starts raining, don't even try to get the cards signed.

Even though my buddy was barely a baseball fan, let alone a 'grapher, he gave it his best shot. And he wasn't about to let a few pesky raindrops shut him out. This card is evidence of that. He got Jared to sign it while it was just sprinkling and the 'graph got smudged a bit. Jared did his best to counter the elements by wiping off the card and blowing on it before he signed, but it looks like it still got hit with a sprinkle in the middle of his signature. It did come out looking a lot better than a couple of other cards my friend got signed that evening, though.

Jared's career lasted just five seasons. He was drafted by the Pirates in the 31st round of the 2006 draft out of Troy University. He signed quickly and was assigned to the Pirates Gulf Coast League team. He tore it up at that level, hitting .432 in 21 games, before getting bumped up to low-A. He hit .250 there to finish out his first season of pro ball and was moved up to A ball the next season. He spent the entire 2007 season in the South Atlantic League and hit .261 with 17 home runs and 56 RBI. He was moved up to High-A for 2008 and he had good power numbers, 20 home runs and 81 RBI, but his average slid to .237. He repeated High-A the next season and regressed a bit by hitting just 11 home runs with 44 RBI and a .229 average.

The Pirates released him after that season and he ended up with the Sioux Falls Canaries in the Am-Ass. He lasted just 45 games with them and hit .204 before being let go. That ended Jared's career.
at 9:54 AM