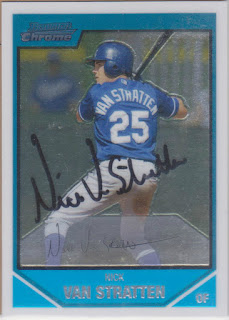 Here is another American Association alumni. But, like the Jared Keel card I posted a few days ago, I got this card signed at an affiliated game. This one was signed in 2009 while Nick was playing for the Burlington Bees. My dad and I were on our way to the Futures Game in St. Louis and we detoured to Burlington to get an additional game in.

Nick was drafted by the Royals in the 10th round of the 2006 draft out of St. Louis Community College. He signed quickly and spent most of the summer playing in the Arizona League, hitting .292 in 54 games. He moved steadily up the minor league ladder and hit AA in 2010. He hit .262 at that level, but it wasn't enough. He ended up replaying that level two more seasons with some demotions back to High-A. He could never stick in AA and never got a chance at AAA.

Nick played in the Royals organization for seven seasons before they gave up on him after the 2012 season.