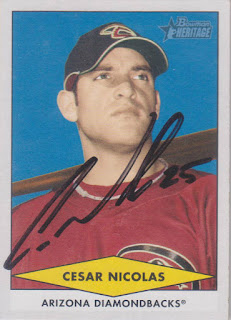 Here is a card that I got signed at a Wichita Winguts playoff game in 2011. Cesar was playing for the Grand Prairie Airhogs at the time. For a playoff game, there wasn't too many people there and Cesar wondered aloud where all the people were.

Cesar was drafted by the Diamondbacks in the fifth round of the 2004 draft out of Vanderbilt. He hit 21 home runs in his first pro season in the Midwest League and followed that up with 14 home runs in the California League the next season while hitting .302 both years. In 2007, he was promoted to AA and his numbers dropped dramatically. He hit just .245 with 9 home runs that year and was forced to repeat AA the following season. His numbers were similar in his second go-around and the D-Backs released Cesar after just four seasons.

Cesar made the jump to independent ball in 2009, spending most of the season with Grand Prairie. He did good enough there to get picked up by the Tigers for the 2010 season, which he spent with their AA team. He started 2011 with the Tigers AAA team before getting released and heading back to Grand Prairie.

He had a really good season with the 'Hogs in 2011, hitting .353 with 73 RBI in 84 games. But it wasn't enough to get back into affiliated ball. Cesar would play for two more seasons in the American Association, Atlantic League, and Mexico before calling it quits after the 2013 season.
at 12:32 PM