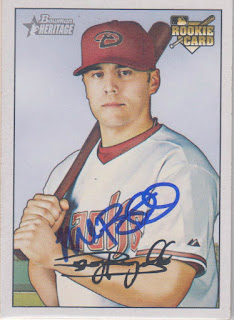 Here is a card that I got signed at a Royals game in 2013 while Mark was playing for the Indians. I got this card signed during batting practice and Mark was nice enough to sign all three cards for me.

When I got this card signed, Mark had just started playing with his third team. He started out with the Diamondbacks and then played for the Orioles before joining Cleveland. He has since played for three more teams since then. He got released by the Tribe later that season and was picked up by the Yankees a few days later. He was then with the Brewers last year before joining the Cardinals this season.

Despite having played for all of those teams, Mark's greatest success came while he was with the D-Backs. Even though he struck out 223 times in 2009, he still hit .260 with career highs in home runs and RBI, 44 and 102 respectively.

Mark has played in 82 games with the Cardinals this season and he is hitting .229 with 8 home runs and 33 RBI while filling in at the corner infield and outfield spots.
at 9:27 PM