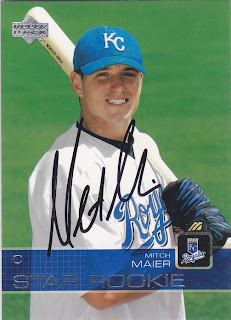 Here is a card that I got signed at the Hubert H. Humphrey Metrodome last October. I asked Mitch to sign when he came in from batting practice and he told me that he would get me later. Usually, that means that you are out of luck, but that was not the case for Mitch. Right before the game started, Mitch was out on the field stretching and warming up. When he was done, he started to head back to the dugout, and, after a few yells his way, he finally heard me and came over to sign, just like he said he would.

Everyone always heard about how loud the Metrodome got. But, if you have never been there, it is hard to really appreciate the noisiness of the place. I found that out while I was trying to get Mitch to sign right before the game started. There was really nothing going on at that point, yet Mitch could barely hear me call to him. Everyone sitting in their seats talking to the people beside them was enough of a disturbance to prevent Mitch from hearing me call for him from twenty feet away.

When Mitch was signing for me, I asked him how he dealt with the noise at the Metrodome and Mitch played it off like it was nothing. He told me that it was loud everywhere and they just had to use hand signals to communicate in the outfield. Yeah, right.

You'll notice that Mitch is listed as a catcher on this card. That is because he was a catcher at the University of Toledo when the Royals drafted him 30th overall in the 2003 draft. The Royals had him catch in Rookie ball that year, but they moved him to third base the following year before moving him to the outfield for good in 2005.
at 12:16 PM

I always enjoy your stories behind the autograph. Good stuff as always!

I think that this was the only halfway interesting conversation I've had with Mitch.

I agree with Ryan. The stories behind the autos are as good or better than the autos themselves.

That's one of the few times I've seen a player say he would sign later and he actually did.

It doesn't happen too often.