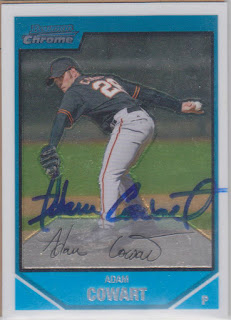 Here is a card that I got signed at a Ft. Worth Cats game in 2009. I was heading down to see my grandparents that summer and I made it a point to stop at some games to and from their house. When I was at the Cats game, my local Wichita Wingnuts happened to be in town and Jared was pitching for them at the time. Jared and I went to school at Kansas State, so I made sure to wear a K-State shirt to the game. When I got him to sign the card, he did not say anything about the shirt. But then the Nuts pitching coach walked by, who is also a K-State alum, and he sure made a big deal about it. He was asking Adam if he noticed my shirt and we ended up talking for about fifteen minutes about K-State and their baseball program.

Adam was drafted by the Giants in the 35th round of the 2006 draft. He played in their system for four seasons and moved up a level in each of his first three seasons, reaching AA in 2008. His numbers went up each year as he progressed, starting with a 1.08 ERA in Low-A and then up to 3.76 in AA. In 2009, he was demoted to High-A, a level he had skipped, and he posted a 7.56 ERA in nine relief outings before the Giants released him.

This is the third player out of the last four that played their college ball in the Big 12. Adam was at K-State, Greg Porter at Texas A&M, and Ole Sheldon at Oklahoma.
at 11:39 PM