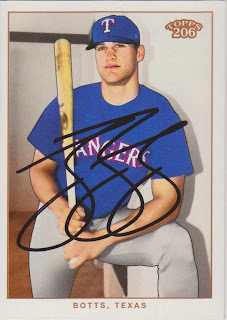 Take a look at that signature. That is something unique. While it is definitely not readable, it does look cool. How one symbol, repeated three times, equals Jason Botts is beyond me. But, I like it anyhow.

If you click on the link above to Jason's Baseball Almanac page, you can see what his signature looked like around 2007. Based on that, you can kind of understand his progression to what the signature is today.

I got this card signed at a Wichita Wingnuts game this last season while Jason was playing for the Grand Prairie AirHogs. He signed three cards for me that day.