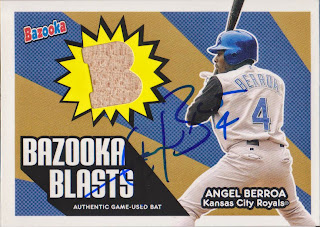 Here is the second card that Angel Berroa signed for me at a Wingnuts game in 2012. Angel was playing for the New Jersey Jackals at the time. Back then, the American Association and Can-Am League each had an odd number of teams in the league. To overcome that, they had one interleague series going on all season, just like the Major Leagues do now. That is why the Jackals were in Wichita. I posted the first card Angel signed for me about a month ago and it can be seen here.

Angel played for the Royals for parts of seven seasons. He spent his first two seasons in Kansas City as a September call-up. He then broke camp with the club in 2003 and went on to have his best season. He hit .287 with 17 home runs and 73 RBI, all career bests. Those number earned him American League Rookie of the Year honors and the Royals gave him a contract extension and a hefty raise.

Angel played decently for the next two seasons, hitting .262 and .270 with 19 home runs. But his average slipped to .234 in 2006. In 2007, he spent the majority of the season in AAA. I actually got to see him play in Omaha that summer and I told my friend that he was the highest paid player in the minor leagues. I have no idea whether that was true or not, but he was making about $7 million that season.

Here he is coming off of the field at the game I was at. 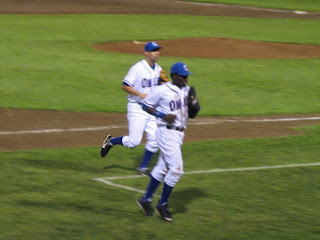 I always thought it was weird that the Omaha Royals home and road jerseys both said Omaha on them.

Anyway, Angel started off in Omaha again in 2008 and played there before finally getting dealt to the Dodgers in June.

I like this card. It might not have been the best card to get signed, but for about $1.25, I am not going to complain. I miss the Bazooka sets. They were cheap and great for autographs.
at 6:46 PM