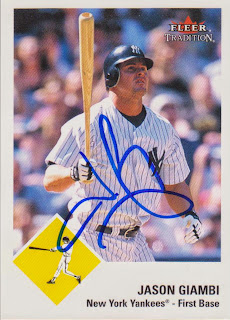 A few months ago, I posted a Jason Giambi autograph that I picked up from COMC for just under four bucks. I bought that card to make up for not getting a card signed by him in 2000. It turns out that I wasted my money. At a Royals game in early 2013, Jason was nice enough to sign for me again. This time, I got cards signed. Being the nice guy that Jason is, he signed all three for me.

Jason spent seven seasons with the Yankees. During that time, he made three All Star teams and had two 40 home run and three 100 RBI seasons. He went to the playoffs five times, but only made it out of the Division Series once. That was in 2003 when the Yankees progressed to the World Series, only to lose to the Marlins.

Jason has spent the last two seasons playing in a limited role with the Indians. He hit only .133 last year and it appears that his career is over. According to an MLB.com article, the Indians do want to keep him with the organization, just not as a player. As for the role he would take on if he takes them up on the offer, it did not specify.
at 11:14 AM