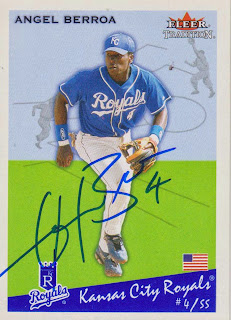 Here is another Royals card from the 2002 Fleer Tradition set. Unlike the last one of Joe Randa that was signed at Royals Fanfest, I got this one signed at a game a couple of years ago. In 2012, Angel Berroa, the 2003 American League Rookie of the Year, was playing for the New Jersey Jackals of the Can Am League. Since the Can Am and the American Association each had an odd number of teams in the leagues, they had interleague play all season long. The Jackals happened to be the team that came to Wichita that season.

This time around, Angel signed all three cards for me. I had met him at a AAA game in 2008 in Albuquerque. While he was nice enough to stick around and sign for me, he only signed one item. I posted that card four years ago.

I enjoyed talking to Angel while he was signing for me. He used to play for the Wichita Wranglers back in the day and the 'Nuts use the same park that they vacated. I asked him about the upgrades that they made to Lawrence-Dumont Stadium and he was impressed with what had been done. It was a fun, but brief, conversation and afterwards, Angel shook my hand before taking the field for warm-ups.

You were lucky - I remember Angel Berroa as a huge pain when he played for the Jackals. He did everything he could to stay away from the handful of autograph seekers in Newark and pretended not to hear when he did have to walk by us. I heard stories to suggest he wasn't much more likely to sign at home, so I never made it a priority to get to the Jackals' ballpark.

That doesn't surprise me. I was more than shocked how our engagement went based on his signing habits when he was a Royal.

It probably helps that when I go to Wingnut games, I am the only 'grapher there.