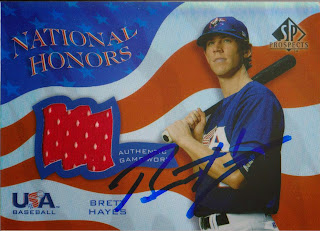 Here is a card of Brett Hayes that I got signed at Royals Fanfest last year. The set-up for Fanfest last year was less than ideal. The set-up for this year looked nearly identical which led to me not attending Fanfest for the first time. But, the one bright spot to Fanfest last year was the final signing of the evening. By that time, the autograph lines had thinned out immensely. Because of that, we were able to hit up four of the six lines they had. Prior to that, you could not go through more than one line per session. Brett was in the second line that we hit as we criss-crossed Bartle Hall to end the long day.

Brett was the Royals back-up catcher last season. Or at least he was until they acquired Eric Kratz from the Blue Jays. He got into 27 games and hit .135 with a home run and 2 RBI.

It looks like Brett is going to be playing for the Indians this season.

I only have three cards from this set that are signed. One of the other ones just happens to be another jersey card from this insert set. It is of Luke Hochevar. You cannot beat a signed jersey card, especially when you can pick one up for about a buck.
at 7:53 PM