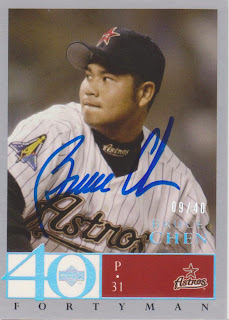 I posted a card of Bruce as a Phillie about a month ago. Now, here is one of him with the Astros. Both cards were signed on the same day. It was at my first Royals game of the season last year, which happened to be an Autograph Afternoon game. Little did I know that day that my final Royals game of the year was going to be game one of the World Series.

Bruce's tenure with the Astros lasted all of eleven games in 2003. He was used exclusively out of the bullpen and he threw 12 innings and did not record a decision. He struck out 8 and walked just as many. His ERA was 6.00. The Red Sox claimed him off of waivers in May and he finished the season in Boston. I could not find a card of Bruce as a Sox player.

So, to date, I have now have posted Bruce Chen with the Astros, Phillies, Braves, and Orioles. Still to come are the Rangers and Royals cards of him. I know that there are some Reds and Expos cards of Bruce. But, since he no longer plays with the Royals (or maybe at all), I doubt I will ever add those autographed cards to my collection.

This card is from Upper Deck 40 Man's Rainbow parallel set. It is numbered 9/40.

If you are into patches, this one has a nice shot of the Columbia patch worn by the Astros in 2003.
at 4:40 PM