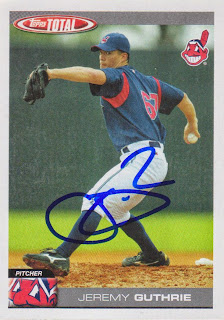 Here is a card of a current Royal that I got signed at Royals Fanfest last year. To date, that is the only time that I have got any 'graphs from him, but I did get three signed that day. I got this Indians card, an Orioles card, and a Royals card. I still have a Rockies card that I need signed.

Jeremy Guthrie, aka "The Real J-Guts", was drafted by the Indians in the first round of the 2002 draft out of Stanford. He pitched in their system for just a few seasons before making his Major League debut with the Tribe in 2004. He made appearances with the club over three seasons, but never started a game and never pitched more than 20 innings in a season. With Cleveland, Jeremy was 0-0 with a 6.08 ERA. He was claimed off waivers by the Orioles prior to the 2007 season.

Jeremy is a unique individual. Though he has made millions of dollars as a professional ballplayer, he routinely arrives at the ballpark in his Toyota Prius or Chevy Volt. Those vehicles tend to look out of place in the Royals parking lot where a majority of the players drive pimped-out SUVs or jacked-up trucks.
at 10:54 PM