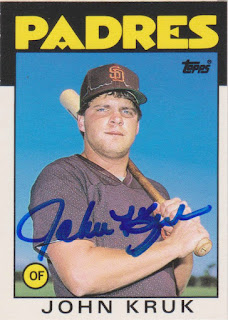 Here is the first John Kruk card that I have posted on here in three years. I posted three Phillies cards of him the last time around and now I finally have a Padre card to show off. This card, like the previous three, was signed at the College World Series in 2014. That was during the good old days when corporate sponsors brought in former players to sign autographs.

Unlike Pete Incaviglia in the previous post, John played some minor league ball before making his Major League debut. And I am sure that there was much less hype around his debut than Inky had. Nevertheless, John had a solid, yet unspectacular, rookie campaign with the Padres in 1986. He got into 122 games that year, but only started 68 of those. The rest of them he entered as a pinch hitter. He only had 4 home runs and 38 RBI, but he did hit .309. Surprisingly, John received a vote for Rookie of the Year while Pete did not.

On a side note, I recently chose to become unemployed. So, I am hoping that this downtime will allow me to do some catching up on this blog and get a card a day posted until I find a new job. But, I am so far behind on here that, even if I go forty days without finding work, I will only be posting cards from the early '90s at that point.
at 10:29 AM

Nice IP auto of Kruk. Solid hitter during his career. As for the design itself... 1986 Topps baseball cards look great with signatures.